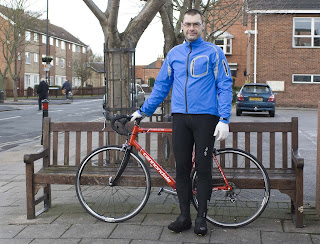 I managed to get out on my road bike a couple of weeks ago, what a weird experience that was. I am so used to my mountain bike that just handling the bike was a new thing, it is so light. The next thing was the pedals, I use SPD pedals on the mountain bike which are standard pedals and road bike use SPD SL pedals (there are others but I wanted these). The pedals are more stronger and only can be used one sided, SPD's can be turned either way to clip into. So a lot of the way I was riding with one shoe clipped in and clipped the other one in when I felt more confident. Next were the brakes, on a mountain bike they are in front of you, a road bike they are on the front of the curved handlebars, you have to ride in a different way and keep your hands near the brakes.

As I rode you could feel all the bumps in the road as I'm used to full suspension as I rode to Cottingham which I chose as it isn't that far away and I always seem to ride there with a new bike lol. As I rode up to the traffic lights in Cottingham I knew there was someone behind me and I was turning right as he was going straight on at the lights, they were on red and he said wow, that's a great bike and I explained about it. So we pulled over to one side and began to chat about bikes, his name was Dave and seemed pretty friendly. He shot off and I went to where I was going, had a drink and got some cyclist to take my photo with my bike. Another rider pulled up as I was setting off and began to chat to me about the Hull CTC which I am thinking of joining. She seemed nice and they other guy who pulled up said it would be good for me to join, let me get used to the bike first then I will, I replied. It was an amazing ride, but just need to get out more to seee how I go with the bike. Rain and high winds stopped me last weekend so I'm hoping this weekend will be ok.
5
Posted by A Friend Called 5 at 12:53