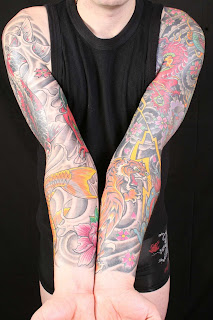 Yes I guess I Am!

As you can see from the picture, I am heavily tattooed. Since I was 13 years old, I decided I wanted to get tattooed. I always had ideas of what I wanted and just a few days after my 18th birthday, much to the moaning of my Parents I got my first tattoo. I got an eagle on my upper right arm and it looked great and felt really grown up, two years later I got my next tattoo, a swallow and a heart with a scroll and my name in it. I knew I just wanted loads and got two more on my legs but resisted any more on my arms. My next tattoo was a dragon on the top of my left arm going onto my chest. It was outlined and that was as far as I got, the tattooist who did it wasn't that brilliant so I left it. I bought an american tattoo magazine in 1992 and saw exactly what I wanted. A guy had a japanese half sleeve that looked amazing, then I began to see pictures of Japanese style tattoos from arms to full bodysuits and they just blew my mind. That is when I knew I wanted a full Japanese bodysuit!

I managed to find a guy down South in Clacton who specialized in Japanese tattoos and was amazing and he did my half sleeve, well three quarters of it. The distance, cost of travelling and the work was too much so left it for a few years till I found a closer tattooist. I found one in West Yorkshire but was a little bit of an ego guy. I then left it another year until 2003 and found my tattooist at a tattoo convention in Manchester and started going to him,. He re coloured and styled my left arm and sleeved it over a year. Then we started my right arm, went over my old eagle and finished it Feb 2007. I start my back in June 2007 and plan to get a warrior fighting a dragon on my back. I will go into details when the work starts but I'm really looking forward to it. It has been a dream of mine to get a full bodysuit which is from my neck to my ankles completely covering my body in ink, and I also plan to get a tattoo on my neck and hands as time goes on.
5
Posted by A Friend Called 5 at 14:52