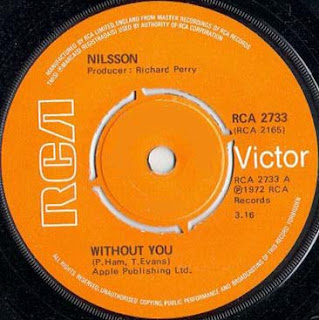 This is my All Time Favourite Single, so I thought as an occasional thing I would feature a favourite song of mine, there are lot's as you can imagine.

I first heard this song as a youngster back in the early 70's when it came out and I always liked the song. As I got older, I had to find out who it was and I bought it as it is just an amazing piece of music.

Without You was first performed by Badfinger who at the time were signed to the Beatles record label Apple records. Nilsson, heard it and thought it was the Beatles (he befriended John Lennon later) he recorded his own version of it and it got to number 1 here in the UK charts in 1972. His heart wrenching vocals about a failed relationship, just make this song and the emotion is just so raw you can feel every 3 plus minutes of it as it plays. A classic song that has a sour ending to it. In the mid 70's there was a royalties row with the writers of the song and Nilsson, they claimed they wern't getting any royalties for the song. The stress of the court case was too much and Pete Ham hung himself, several years later on Tommy Evans hung himself as well. To make matters worse, in the 1990's Mariah Carey issued her version and completely murdered the track dead with her screeching awful vocals.
5
Posted by A Friend Called 5 at 13:34

Labels: All, Favourite, Nilsson, Time, Without, You