Back On The Bike

This morning I went out on my first bike ride in months and really enjoyed it. I didn't go fast, just went out to test the knee and it was fine, just got the odd twinge when I put a lot of pressure on it when stood off the seat to ride off from traffic lights. It felt great to put my cycling gear on and to know it's a good ride ahead of me! Today is Easter Sunday and it is lovely and sunny, still cold but really fresh and the clocks went forward early hours this morning so you get a feel that maybe spring is really here, let's hope so! 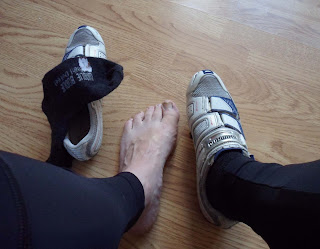 Finally got to the gym today, first time at Xercise4less in Hull and it's not a bad gym. Luckily when I walked in Amanda from Fitness First was there and we talked a little then she showed me where the changing rooms where. The place is huge with a lot of equipment but as she says it get's really busy around 6-8pm so they will be the times to avoid unless I just go to do some cardio. So today was just to see what I can do and managed 10 minutes on the cross trainer and the same on the treadmill. I went on one of the machines to work my legs but with barely some weight on just to move the knees and my legs are really stiff. Whilst I was talking to Amanda she noticed I'm hobbling a little but now I think it is more of a protection thing rather than an actual pain, so I got to work on that.

I tried to do some rowing but that was making my knee crack and so I stopped doing it, but will try again as it didn't actually hurt. So I think I'll carry on doing what I did at the last gym, have a good session over the weekend on my back and chest when I can get to the equipment easier. So I'm looking forward to getting back into the gym and I have missed it too!

I need a holiday, my Easter break is coming up next week and I just can't wait. Spring is suppose to be here but it has been snowing here and it is so cold. I need some sunshine or something to remind me that spring is just around the corner. I'm fed up of wearing winter clothes and not being able to wear less layers and wear stuff that I'm not gonna get soaked in!

Diet is going well, today I got weighed and I'm 81.2kgs which is around 12st 10lb which I'm chuffed about as I know the diet is beginning to work. I just need my knee to be ok. enough to get me to the gym anyhow. Hopefully tomorrow I'll get there and I can start to shift the pounds and get back to the weight I was any maybe lose a few more pounds and get to see my abs, that's my goal anyhow. Here is a photo of how I look right now, not very flattering but that is what I want so I can see where I was to where I get to! 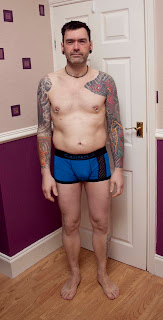 Went to see the physio today and after some moving and pressing on my leg, she thinks I've got weakened muscle around my knee on the inner side. She found the area that hurts, pressed on it a lot and you could hear my knee cracking. She says that the weakened muscle is preventing my knee from moving in a straight line and is in fact moving at a slight angle, which is making the knee crack and is weak. So I have to go for an x-ray for my peace of mind she says and then I can start some physio with her to get the knee strengthened up again. She also aid there is no reason why I can't go back to the gym or start cycling again. So I plan to start the gym at the weekend, hopefully it will be a little quiet so that I can slowly get my knee working and the fact it is a new gym and got to get used to the place too! Can't wait!

The diet has started again today, I'm trying the diet I went on last time, cutting out carbs and eating chicken, veg and fruit. I had results last time and I'm hoping they will start again to show. I also want to be in reasonable shape for when I get back to the gym, so that I have the energy to get back into the cardio and weight training without having to lose weight first, then get into the cardio. I want a photo of me when I start the diet this time to compare for when I get so far into getting back in shape so I can look and see the results. I ought to get weighed and measured but to be honest right now I really can't be bothered tonight, maybe tomorrow!

Thursday night was a bizarre night. Around 9pm I could smell gas, didn't know where it was coming from then all of a sudden the smell went so I though nothing of it. When Vince came home I asked if he could smell gas and he could, but same thing happened. So around 11pm the smell got really strong so I called the gas people and they would send someone, but it would take about 2 hours so they told me to open a window and turn off the gas supply. He arrived about 12.30am and started to check the house and told me there was no leak in the house but the smell of gas was getting stronger. So he went outside to do some testing as there's a gas main outside the house.

He came in and told me to go outside as he found the cause of the leak, he stuck his probe through the letterbox of next door and it was coming from inside their house! He said "I need to be in there" so I was knocking on the window as he was banging on the door to finally wake them up. "Don't switch the light on" shouts the gas man but too late! The guy next door opens the door and the smell of gas just hits you and the gas man runs in and finds out he has left the gas ring switched on. I could hear him bollocking the next door neighbour as he is doing all the checking. So by the time things are sorted it is 2am in the morning and my bedroom is full of gas so the windows are open and I manage to get about 3 hours sleep.

I come home on Friday from work and the guy from next door knocks on the door, he wanted to say sorry and thanks for as he said for saving his life. It seems he was involved in an accident years ago and has no sense of smell. He had got drunk and decided to sort some food out and fallen asleep. The gas had gone out and was pumping gas for about 6 hours in the house, so I don't know if the beer knocked him out or if it was the gas. "It's microwave meals for me from now on" he said I laughed as it was such a strange carry on although he told me him and the gas man didn't get on and it seems they must have had words.

When I think about it, just how much damage a gas leak can cause and the fact me and the gas man were banging on the door trying to wake him up. What if it had ignited and could have blown us up or damaged the houses in the street, but thankfully it didn't happen and it was happy ever after!